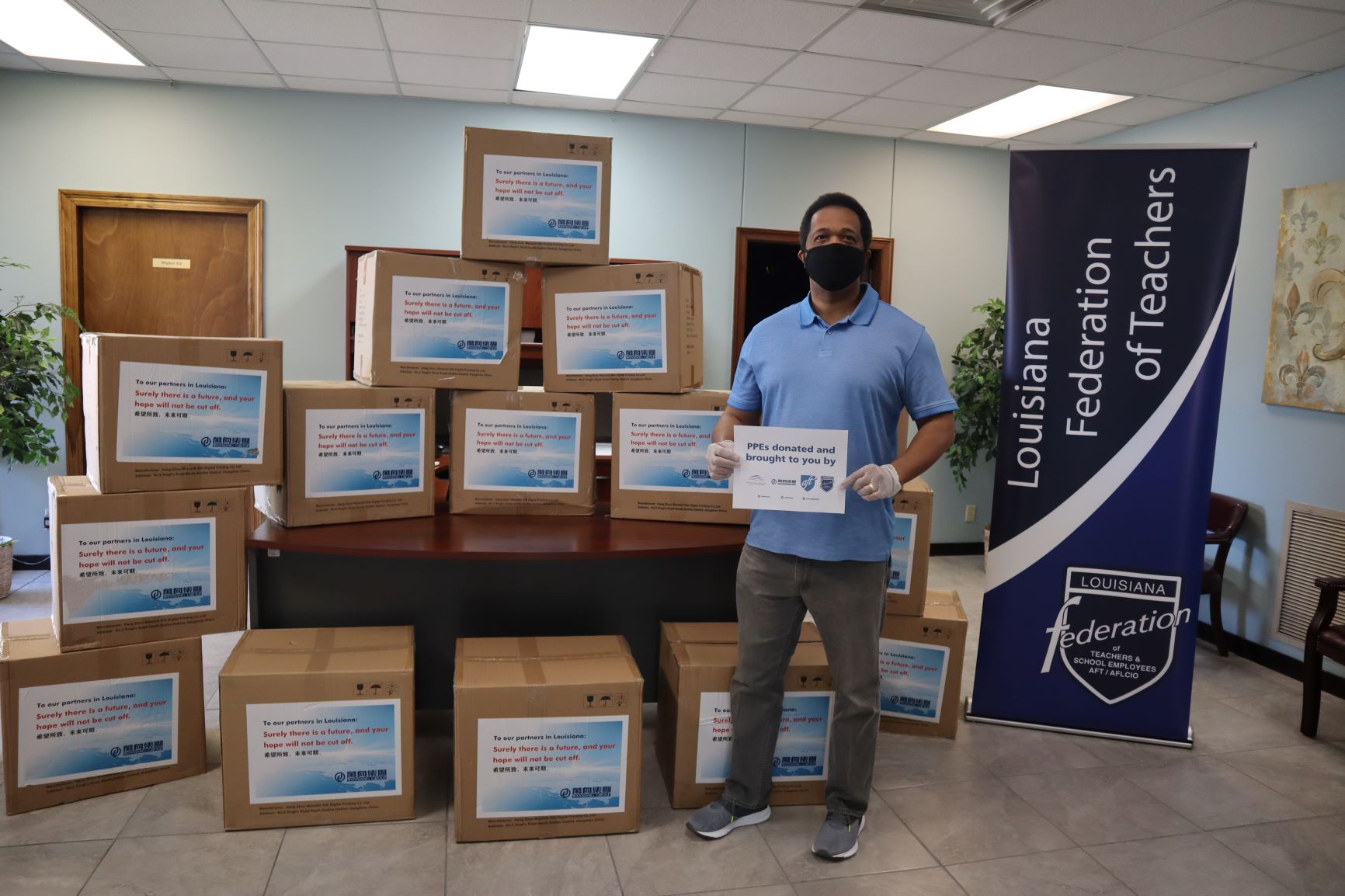 LFT has partnered with our national affiliate, American Federation of Teachers to bring 30,000 masks to Louisiana teachers and school staff. These masks were donated to LFT by the United States Heartland China Association and the Wanxiang Group.
Inadequate Personal Protective Equipment (PPE) has plagued frontline workers throughout the pandemic, which is why LFT and our partners are making these free masks available to any member who needs one. Please contact your local affiliate to get your mask or learn about their individual distribution plan.

This month the U.S. House of Representatives passed the HEROES Act which has the potential to drastically help Louisiana if passed by the Senate and signed into law. Because of decreasing tourism revenue, decreased sales taxes and plummeting oil prices Louisiana’s economy has been hit harder by Covid-19 than any other state in the nation. Before this is over, Louisiana is projected to see 269,477 jobs lost by July as a result of Covid-19, and the unemployment rate is expected to be 18 percent.
The HEROES Act could mitigate some of this damage by providing relief funding to states and local governments. Louisiana would receive $1.5 billion in education funding for public K-12 and public colleges and universities if the Senate passed the HEROES Act. The K-12 portion of these funds would provide Louisiana $981.7 million. That’s enough to save or restore the positions of 6,072 teachers, 1,657 teacher aides and 4,129 other workers. We would also receive $8.6 billion in direct aid to the state and $4.7 in direct aid to local governments to offset the economic damage from the pandemic and $1.9 billion in Medicaid funding.
Please tell our Senators Bill Cassidy and John Kennedy how important this funding is for your schools and communities. Click here to send them a letter.
Then, call 1-833-868-8109 to automatically be connected with one of Senators so that you can leave a voicemail asking them to pass the HEROES Act. 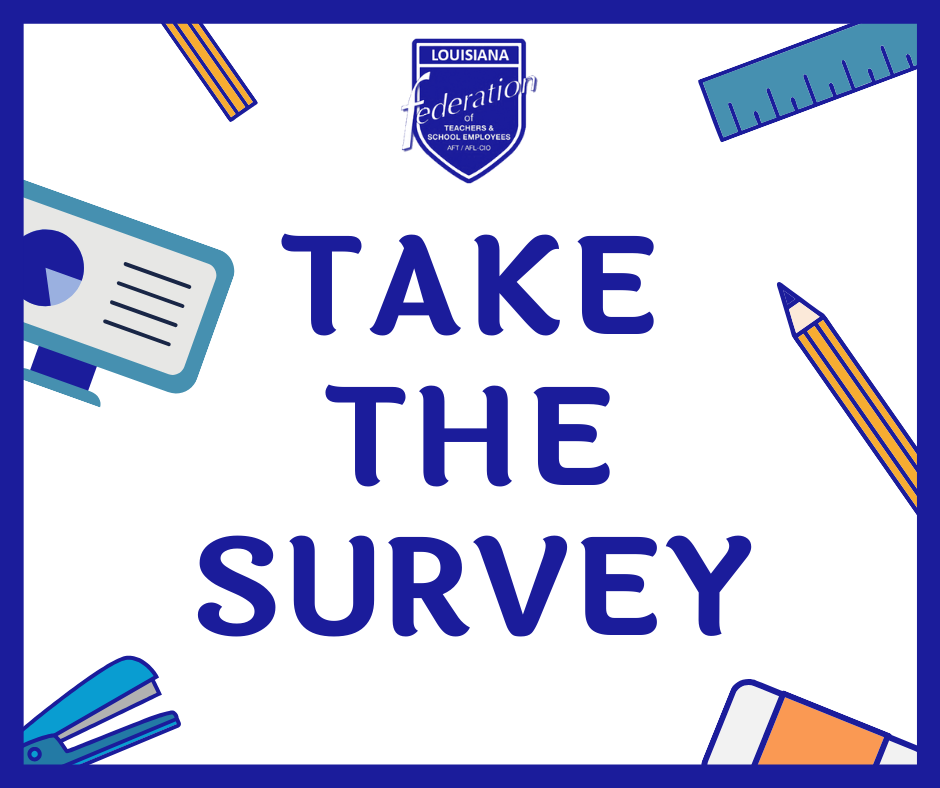 The pandemic has pushed so many of us to take on new technologies and skills that we never knew we needed. Louisiana Federation of Teachers has created a survey designed for you to give us feedback on the areas in which you would like additional training. The information you provide will be used to prepare a comprehensive professional learning program tailored to the needs of our members for the students they teach.
Thank you for your time and careful consideration as you complete each section of this survey. Your responses will remain confidential.
Click here to take LFT's Professional Development survey no later than Monday, June 1st. 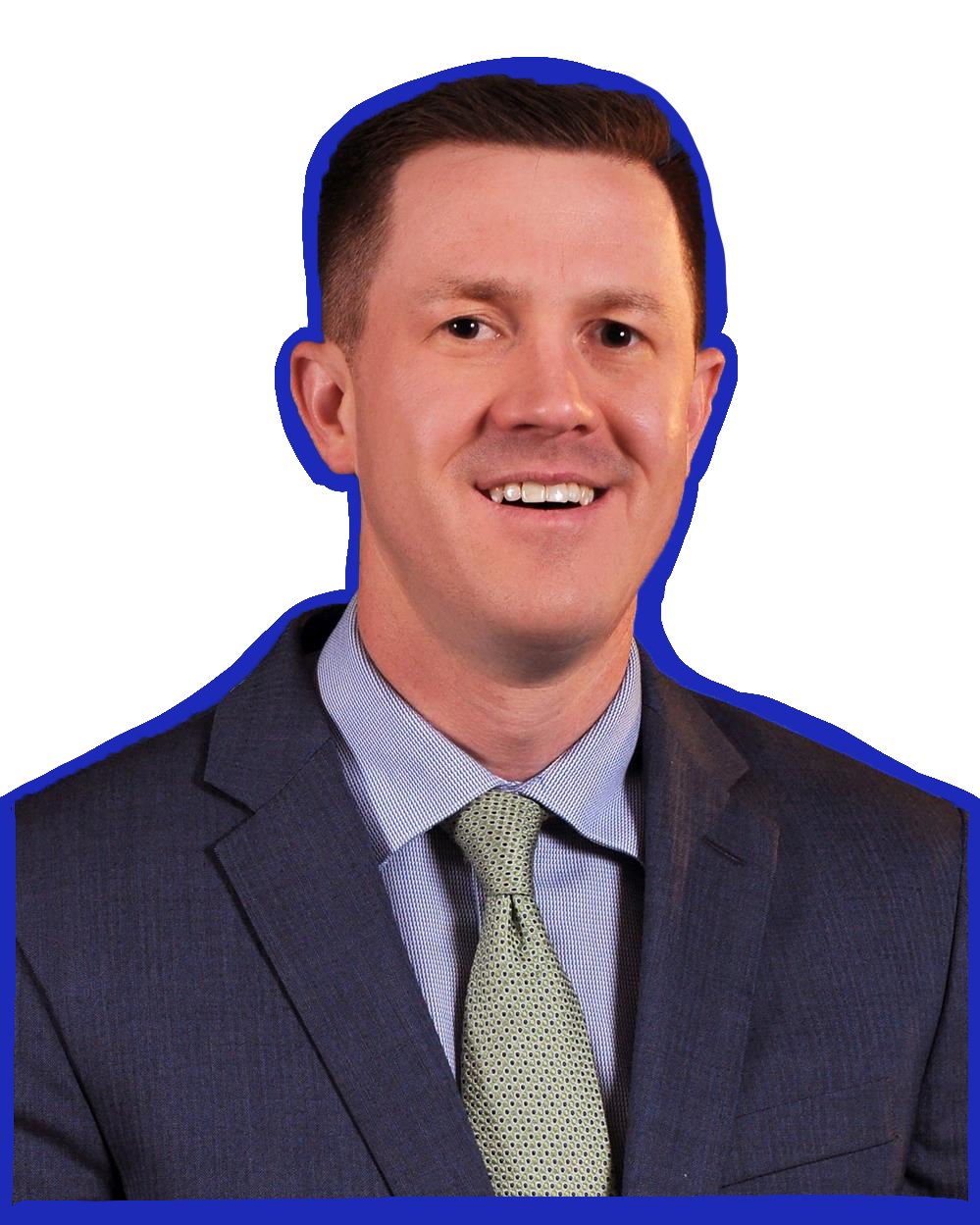 After skipping last month's meeting due to COVID-19, the Board of Elementary and Secondary Education met on May 19th and 20th. Additional precautions were taken to ensure everyone's safety. Masks were required for everyone, gloves were provided for additional security, staff cleaned the tables and microphones before each person's testimony, and everyone was required to stay 6 feet apart.
The Board considered its normal agenda, but by far the most divisive and consequential issue came at the end: who should serve as Louisiana's State Superintendent. John White left the position in March and Beth Scioneaux has been serving as Acting State Superintendent throughout the Covid-19 crisis, but did not apply for the position permanently. Previously, the BESE Superintendent Search Subgroup has narrowed the search to six finalists and conducted a survey to gauge public opinion. The results showed that teachers, support staff, parents, and community members overwhelmingly favored Dr. Brumley and his experience as an educator.
Of the six finalists, the Board nominated three candidates to fill the position: Dr. Cade Brumley, Jessica Baghian, and Dr. Lonnie Luce. In the initial round of voting, no candidate received the required eight votes so the board took a break and reconvened for a second round of voting. In the next round, Cade Brumley emerged victorious, securing exactly eight of eleven total votes.
Dr. Brumley and BESE President Sandy Holloway later negotiated the terms of his employment contract including pay and benefits, which was approved by the Joint Legislative Committee on the Budget Tuesday, May 26th.
On Wednesday, Dr. Brumley was confirmed by the Senate and Governmental Affairs Committee and he is expected to be confirmed by the full Senate before the legislative session adjourns on June 1st. He will begin his new role on June 8th.

On May 12th, LFT hosted an exclusive, members only telephone town hall with Governor Edwards, AFT President Randi Weingarten, and LFT President Larry Carter. The conversation focused on the damage caused by Covid-19 across our communities and our path forward. 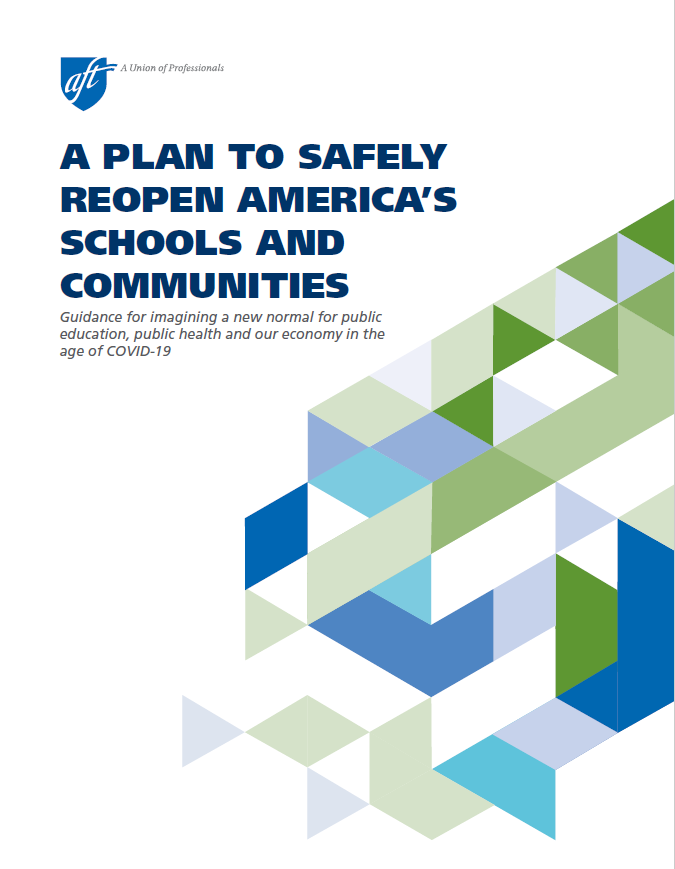 In just a few short months, the virus has claimed the lives of over 2,600 people in Louisiana alone and even more have lost their jobs or experienced economic hardship. We have finally flattened the curve, our state has begun to reopen, but much remains uncertain. That is why AFT released A Plan to Safely Reopen America’s Schools and Communities to give local school districts guidance on how to safely and gradually reopen. On our call, Randi Weingarten went over the five main pillars of the plan and stressed the need for federal funding to help states and local governments weather the devastation.
Governor Edwards discussed the multi-phase reopening plan for Louisiana as outlined by the White House guidelines. The three-phase plan officially began on May 15th. The goal is for phase 1 to last 21 days until June 5, when the state could move into phase 2. The Governor talked about how it takes 14 days to start seeing the impact of our actions in public health metrics like test results and hospitalizations. If we continue to see a decline in cases, then we can safely continue to reopen more of the state after 21 days, but if we see spikes in the number of cases we can adjust accordingly.
At the end of the call Governor Edwards, Randi Weingarten and Larry Carter fielded questions from our members. Most of the concerns focused on the upcoming school year and the what that might look like given the state’s financial hardships and the ongoing threat of the virus. Governor Edwards discussed the K-12 work-group that is made up of community stakeholders including LFT members who are working to build a report about what the fall semester should look like. “I can’t really tell you what that’s going to look like; I can only tell everybody it’s not going to look normal. We won’t be back to fully normal until after such time as a vaccine has been created and mass produced” said the Governor.

On May 14th Senator Katrina Jackson brought SB 298 before the Senate Education Committee. This bill would have helped to resolve problems caused by the Value Added Model (VAM) system by removing the requirement to use VAM scores in teachers’ evaluations and district accountability. Unfortunately, SB 298 was deferred before the Committee and will not continue in the legislative process this session, but it received overwhelming support from teachers, support staff and community members.
While this was not the desired outcome, we are grateful to Senator Katrina Jackson for taking up this important issue. In a single afternoon almost 1000 teachers and parents wrote letters of support for this legislation and nearly as many signed on to a petition. Those voices were included in the Committee's official record, thus underpinning the overwhelming public support for the bill. Senator Jackson will move forward with another resolution to further study this issue and we will continue to fight back against expensive, unnecessary, and unrelenting testing on our children.

The legislative session must end no later than 6pm on June 1st, but the legislative leadership will call a special session beginning at 6:01pm on the same evening to address the budget and a list of issues sought by business lobbyists. The governor typically calls special sessions, but this one has been called by the Legislature. This special session must end no later than June 30th, which is the same date by which the legislature must pass a budget.
The legislative agenda for this Extraordinary Session is limited to 41 items including a number of items that could be detrimental to education funding, especially considering the ongoing economic crisis caused by Covid-19.