In January we saw the first meeting of the new Board of Elementary and Secondary Education. Last year, each seat was up for re-election and while most members retained their seat on the board, we have four new faces: Dr. Belinda Davis, Preston Castille, Ashley Ellis, and Ronnie Morris.

The first meeting of the board was a special meeting on January 16th to accept State Superintendent John White’s resignation. And on January 28th and 29th we saw the regularly-scheduled Board and committee meetings.

It was interesting to watch the new BESE members make their mark on the Board in these first meetings. Dr. Belinda Davis clearly came ready to work – she asked lots of clarifying questions to make sure everyone understood exactly what was being recommended and voted on. She comes to the board with the perspective of a parent and an educator and her commitment to her responsibilities on the board was clear in these first few meetings. Preston Castille also made a strong impression when he led a discussion between members of the Board and senior members of the Department of Education about their overarching goals for education in Louisiana. In that discussion, Ronnie Morris speculated about what the Board could do to help teachers – an important question, but unfortunately not one that we’ve seen many BESE members ask in recent years. This Board still has nearly four years to work together and we are only beginning to see how they interact. The first real test of their priorities will come when hiring a new State Superintendent.

It was determined that Kira Orange Jones will lead the search committee for John White’s replacement (with the assistance of an outside firm, yet to be announced), and they hope to have a new hire sooner rather than later. While no official timetable was discussed, White will vacate the role in March and many of the Board members hope to fill the position by April or May (if not sooner). To read more about the January BESE meeting, click here.

After last year’s contentious elections, January brought our new and old representatives together to begin their work on behalf of the Louisiana voters. Governor Edwards was sworn in at a ceremony on the steps of the Capitol on January 13th. On that same day the House and Senate convened an organizational session to elect the President of the Senate and Speaker of the House. As expected, Senator Patrick Page Cortez from the Lafayette area was chosen to succeed John Alario, Jr. as Senate President. The race for Speaker of the House was more unpredictable. With bi-partisan support, Representative Clay Schexnayder beat out Representative Sherman Mack for the job, despite Mack's support from the Republican establishment. Speaker Schnexayder is a Republican from the Gonzales area; he represents Ascension, Livingston, St. James, and St. John the Baptist parishes.

Each year since 2001, LFT and AFT work with U.S. Representatives in an attempt to repeal these provisions so that teachers and support staff in Louisiana can have access to their entire social security benefits. Detractors of the repeal say such a dramatic shift would simply cost too much (and the legislation does carry a $40 billion fiscal note), which is why LFT and AFT have also worked with U.S. Representatives to develop the Public Servants Protection and Fairness Act (PSPFA - H.R. 4540) – a more measured step towards undoing the damage of the WEP and GPO.

We encourage our entire Louisiana congressional delegation to support both the SSFA and the PSPFA. Ask your U.S. Representative and Senators to stand up for public employees in Louisiana and fix Social Security.

American Federation of Teachers (AFT) held the Southern Regional Meeting for State and Local Presidents in Austin, Texas on January 11th and 12th. AFT is holding meetings in each of the Union’s five geographic regions throughout the country.

The regional conference offered leaders training opportunities with workshops on communications, student debt, Fund Our Future actions and other topics, including a panel featuring LFT President, Larry Carter, Jr.  This was also a chance for state and local leaders to engage directly with the AFT’s endorsement process and examine how we can support candidates at all levels—from statehouses to Congress—who share our values.

If you haven’t already: don’t miss your chance to weigh in on AFT’s Presidential Endorsement process by completing this brief survey.

FIGHTING BACK AGAINST WORKPLACE BULLYING 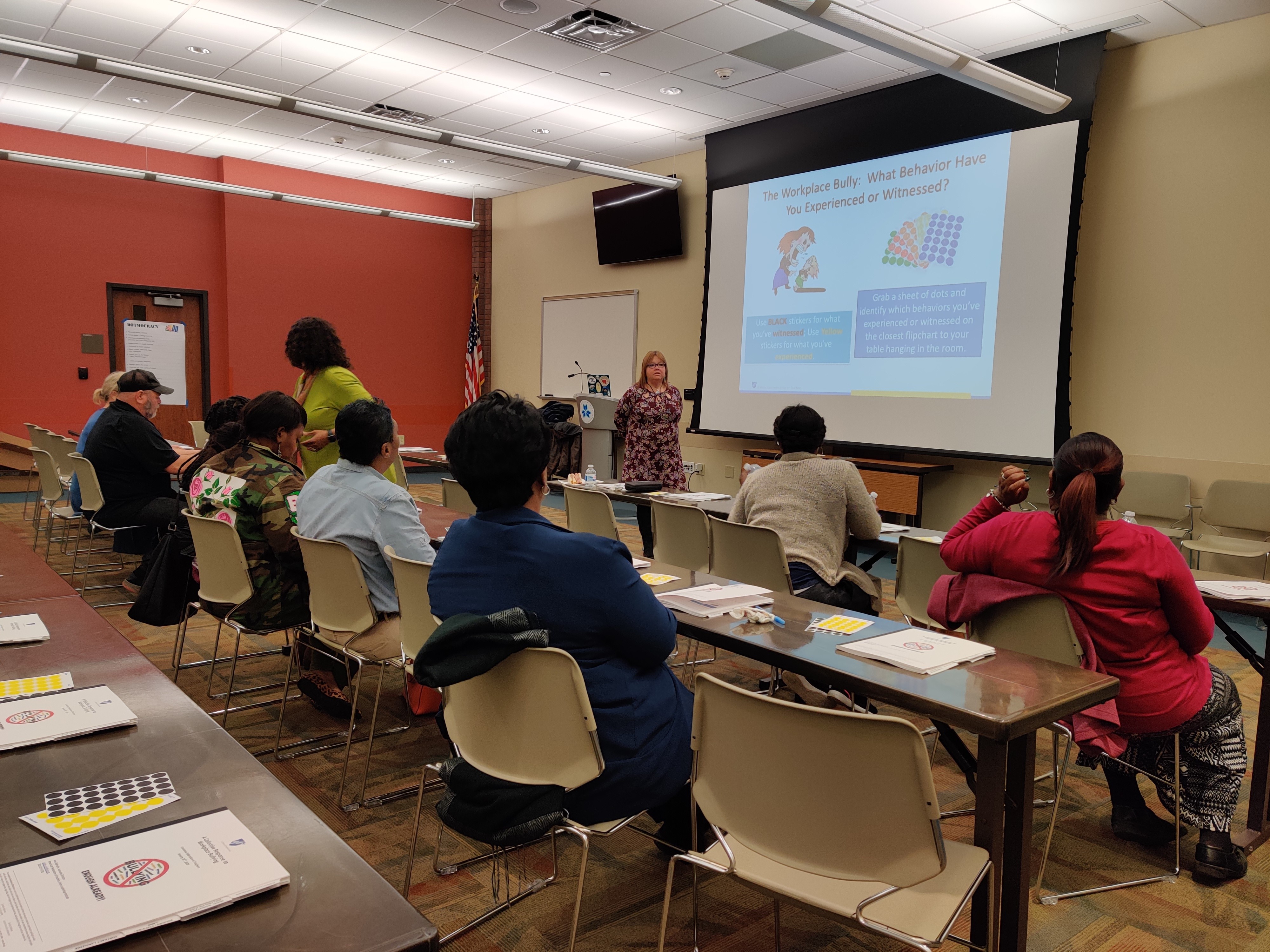 St. Martin Federation of Teachers and Support Personnel hosted a workshop in Lafayette aimed at addressing the growing epidemic of workplace bullying. The training on January 30th addressed the physical and mental impacts of bullying in the workplace and provided participants with strategies for building a culture of respect at work.

The training was open to all employees of the Lafayette, Iberia, St. Landry, St. Martin and Vermilion Parish School Systems and was held at the Lafayette Public Library at no cost to school employees. Amy Hale from AFT's headquarters in Washington D.C. facilitated the training which examined school policies and local laws addressing workplace bullying, but also aimed to have participants reflect on their own experiences and power to initiate change.

If you would like to host a similar training in your district, please contact your local LFT Representative.